Whether April Fool’s day originated in England, France, or Netherlands, it is still in dispute, however in modern times, it has spread throughout the world. For many years, playing practical jokes on this particular day has become popular in Asian countries too, which is at least partially fueled by government officials who want to put a stop to its popularity. “April Fool is an European tradition and it doesn’t belong to us.” Messages abound before the day arrives each year to dampen the spirit for pranks. Unfortunately such a message only serves to spread the information further. Those who have no idea of April Fool start to know about it and immediately want to emulate; those who don’t care about it start to care about it. “Is it so popular now that it deserves a serious message from the government?” And they don’t want to be outdated and left out of the loop of popular fun other people are having.

Last year, the South Korean K-pop star Kim Jaejoong posted on Instagram, faking a hospital stay due to Covid-19, and feigning that he lived carelessly and ignored warnings. He apologized repeatedly afterwards for his April Fool’s joke. Many fans were still annoyed how irresponsible he was. Come on. Give him a break. He’s young and cute and sometimes foolish. Actually this is not the first time he does foolish things.

My roommates and I once did a prank in college, but it didn’t give us the fun we thought we were going to get. There were one boy and one girl in our department who we thought should be a couple. So we wrote two letters, one to him to declare her love for him, one to her to declare his love for her. Just like “Much Ado About Nothing”. However there’s no dramatic result came out of it. The added frustration was that we couldn’t even make inquiries. If we did, it would be equivalent to admitting our guilt. So we had to stay quiet and observe the two intensely, but nothing came out of it. Such an anticlimax was a big blow to the original excitement we experienced when we drafted the letters–mostly we copied from popular love poems, with a couple of daily details throwing in to make it real.

Ever since then, I only indulge my interest in prank through literature. “Much Ado About Nothing” is certainly a most endearing love prank story. Wait, it actually has two love pranks–one is for good fun and the other is plain vicious that no normal sane person would ever want to do. 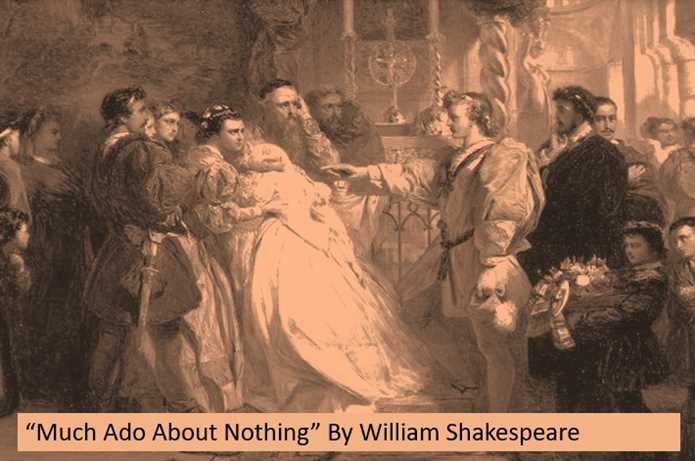 However my favorite prank story goes like this: A poor clerk is paying a visit to a provincial town. He has no money and can’t even afford lunch. However soon he realizes that the entire town is waiting for an inspector from the central government, who’s rumored to come to check on everybody incognito. The poor man immediately starts to pretend that he’s the inspector. Soon the local landowners queue up to see him and the town mayor is eager to marry his daughter to him. This is “The Government Inspector” by Nikolai Gogol. This is just one example. And there are so many stories that are prank like in books. “The Count of Monte Cristo”, “The Tempest”, “The Great Expectation” and a lot more.

Some would say all literature is prank like. It’s fiction. And probably that is true. So for people who love fictions, it is a fool’s festival every day in their restless mind.