A girl falls in love with a guy, but the guy doesn’t reciprocate. The girl goes to the King, who forces the guy to marry her. The guy does what he’s forced to do, but leaves her right after the wedding to the frontier to fight the invaders. While he’s fighting the enemy, the girl has to steal his ring, bribe his lover, fake her own death, and finally show up where he’s trying to get himself engaged to somebody else. In the happy end, the girl gets the guy.

I thought this is a ridiculous story at first. Such a nice and vivacious girl should find somebody who loves her, not this heartless philanderer. With so much energy for love and sacrifice and hard work, she should get someone worthy of her love. I didn’t believe such an event had ever happened or would ever happen; I didn’t believe such a girl had ever existed and would ever exist. It’s just theater and drama, “All’s Well That Ends Well”. Also Shakespeare is never very good with his plot design. Think about “King Lear”. The beginning where King Lear insists on being ardently loved by his three daughters is quite absurd. Do parents make such outrageous demands on their children? “Declare your unconditional love for me, kid. Or I will punish you.” This kind of question will surely receive an answer like, “Dad, are you OK?” 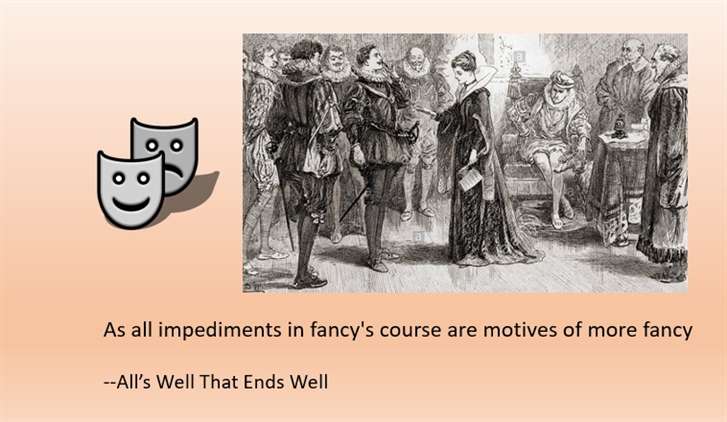 Then I met this girl C in college. She went to a dance and met this guy T. We were all in the same college. The girl asked him out, but the guy was not interested. He even deliberately asked other girls out in front of her, but that served as no deterrent. Every girl T tried to go out with would receive a visit and a plea from his ardent admirer C. After several rounds, they eventually became girlfriend and boyfriend, at least for a while. So it’s really like what is described in “All’s Well That Ends Well”.

After that, I’ve met several couples like that. The girl would do everything, cooking, cleaning, serving, and running errands. She’s very happy with her sacrifice, and he’s content with being loved. All’s well that ends well.

Of course I can never do things like this since I am never a very eager person to start with. More importantly I am always concerned how other people will react to me. Their reaction is as valid as my own feeling to me, if not more valid. 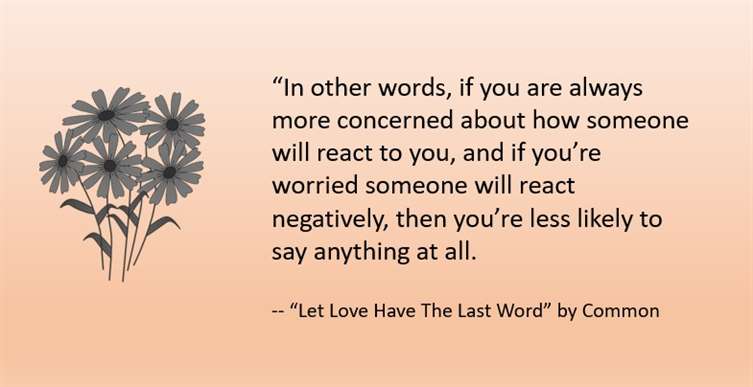 Then I read this passage:

Recognizing, speaking to, and honoring our truth is the correct path to fostering love and intimacy; that such communication is difficult only underscores the impact of this positive and open connection.

“Let Love Have The Last Word”

It’s true, isn’t it? If we are too concerned of the negative reaction of other people, we are going to stop expressing ourselves altogether. Sometimes we just have to honor our truth, despite all the oppositions, even the oppositions from the person we love. Without this, it is hard to reach love and intimacy.