Akito Nakamura is a typical Japanese boy with an atypical family history. His father is a Malaysian who went to Japan to attend a graduate program, during which he got to know Akito’s mom Momoe Nakamura. When the program ended, the two decided to get married. However after Momoe traveled to Malaysia to meet the in-laws, she changed her mind. They separated. His father started to work as a pathologist in Malaysia while his mother Momoe stayed in Japan. Soon afterwards, Momoe found she’s pregnant.

Akito grows up uneventfully, but when he starts to date, he realizes that he’s different from other boys–nice and proper Japanese girls just don’t want to have anything to do with him. He has a string of girlfriends who are really unsuitable for him. Finally his mother arranges for him to become an exchange student in a college in Malaysia for a semester or two. Akito knows what this means–his mother expects him to date a nice Malaysian girl.

Tammy, the nice Malaysian girl who’s attending college at the time, met Akito on campus. Two years later, they got married. They moved to Tokyo where Akito is a freelance architect while Tammy works as a nurse assistant. Their life is fine, but Akito is ambitious. Architects as talented as he is can always get good jobs in government or big corporations, but he cannot. The only position for him is a freelancer and a contractor. His work is unstable and contract negotiation is a constant headache. The most humiliating of all is that he has to maintain good relationship with his good-for-nothing former classmates who have cushy jobs in the government and big companies, who can throw some projects at him.

His mother Momoe always wants to help her son and one day she finds the way. Momoe’s family are farmers from the north and they scrape by each year. When her mother died, Momoe inherited a little piece of land in the north. Originally she has no intention of doing anything with it since she’s settled in Tokyo for decades. Then one day the village head comes to see her to ask to purchase the land from her since there’s a project going on, for which Momoe’s little piece of land is in the middle. Momoe realizes she has the chance and pounces on it. She says she can give up the land if the village head can use his connection to get her son a job in the big corporations or the government. The two sons of the village head are doing very well in Tokyo and Momoe is sure they can help. So it is settled. The land is given up and Akito got his big corporation job.

However things don’t go as well as Akito and his mother originally expected. In the big corporation, people look down on Akito. His dubious parentage is irksome to his colleagues. People like Akito has no right to be in the big corporations and enjoy the privilege of the circle. How to solve this problem? The big corporation has its way. They sent Akito to the small New York office overseas so that he doesn’t have to show up daily in the corporate center to annoy his conservative colleagues. This is how Tammy and her husband Akito eventually come to live in New Jersey, from where Akito commutes to New York every day.

When Tammy is living in Tokyo, she has a hard time adjusting. Not only Japanese language is difficult to learn, but also the complicated social system is impossible to understand. The relationships between the wives are ordered by some incomprehensible divine rules to reflect their husbands’ relationship. This means the wives of lower clerks have to observe the social order of their husbands lower status and behave accordingly. It is difficult, if not impossible, for Tammy to know whose husband is better positioned than whom. Nobody gives her a chart of “Who’s Who” and she doesn’t know how to ask the embarrassing question, like “what’s your husband’s position in comparison to somebody else’s position.” Also Tammy’s husband’s Akito’s status as an independent contractor is hard to categorize. Every day she is doing something wrong, either being too friendly, too respectful or not enough friendly, not enough respectful.

Then the school lunch problem comes up. Tammy lives in Tokyo for eight years and don’t know about the intricacies of the school lunch until her son Aito comes back crying. The school lunch Tammy packs for her son is too simple and his schoolmates laugh at him. From talking with her neighbor, Tammy realizes that the lunch box has to be beautiful and showy. Otherwise it doesn’t reflect well on the family, especially the mother. 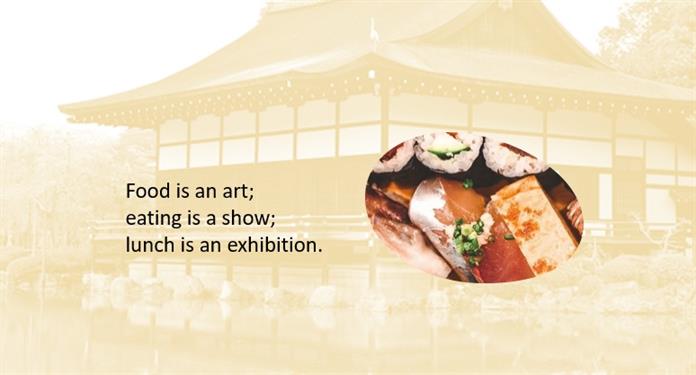 Finally, after watching a TV program, she starts to learn how to make beautiful lunch boxes for her son to have a normal school day. It takes a while, but she finally masters it.

When the family moves to New Jersey, Tammy breathes a big sign of relief. Finally she can relax a little bit on the artistic display of school lunch and the fear of misunderstanding everybody’s status.

The first month goes by smoothly for Tammy and her family. They rent a place in a town with a convenient commuter train to New York City. However, soon she receives a summon by her son Aito’s teacher. She has already met the teachers the first day Aito went to school. And she wonders what the trouble is. Is Aito doing well in school?

When Tammy comes to the office, she’s received by a very young teacher Lisa, who’s very sweet and friendly and energetic.

“Aito is behaving very well. He’s in English As Second Language class, but he will soon get out of it.” Lisa says.

“Good to know, but do you want to talk with me about something?” Tammy is more accustomed to the straightforward method and eager to know what the trouble is.

“Oh, it’s about the lunch box Aito brings with him.”

“Oh, I am sorry. I understand your concern. I will change tomorrow.” Tammy says.

“You understand?” Lisa is a little baffled.

“Yes, I understand you and you don’t have to worry. I assure you. I haven’t worked as hard on his lunch box since I come here. Last week I used more leftover food than usual and it makes the box less appealing. However I will improve and you don’t have to worry.” Tammy speaks very fast and a little agitated. Somehow she’s caught again for the lunch box trouble really makes her nervous.

“Yes, improve. I’ve been using the Panda theme too often. You know white rice and black seaweed is a perfect color combination to create a panda theme, with a little green on the side as bamboos. So it is the easiest theme. I am getting lazy and use it too often. I am going to change it and use the more difficult comic characters as themes.”

“I don’t think you understand me. ” Lisa says.

“Really?” Now it is Tammy’s turn to be baffled.

“Oh, what do you mean by that?” Tammy is completely confused now.

“Basically a simple sandwich, a yogurt, or an apple will do.” Lisa says.

“Excuse me? I don’t understand.” Tammy stares at Lisa and Lisa thinks this parent is really slow.

“By the way, I really love your lunch box and it is beautiful.” Lisa says.

“Really? Thank you. So no need to improve?” Tammy asks and wonders why Lisa complains about the lunch while still praises the lunch.

“OK. Let me speak plainly. Your lunch box causes psychological trauma to other kids. It’s too beautiful and elegant. It makes other kids feel uncomfortable and inferior. I could have sent a memo to you, but I thought it would be better if we talk face to face. You understand me now, I hope.” Lisa says.

17 thoughts on “The Crazy School Lunch”