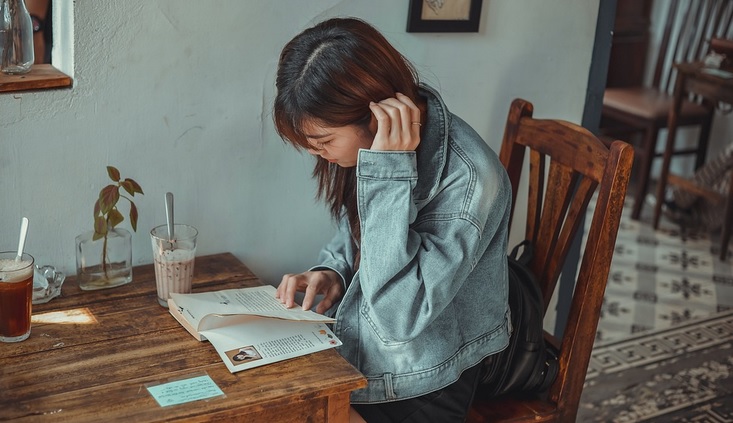 Image by hoahoa111 from Pixabay

I have become a bore, I have been asked to forfeit my independent young feminist card. I don’t care. I balance his checkbook, I trim his hair. I’ve gotten so retro, at one point I will probably use the word pocketbook, shuffling out the door in my swingy tweed coat, my lips painted red, on the way to the beauty parlor. Nothing bothers me. Everything seems fine, every bother transformed into an amusing story to be told over dinner.

It had turned me into a knee-jerk suckup to authority. Mom, Dad, teachers: Whatever makes your job easier, sir or madam. I craved a constant stream of approval. You’d literally lie, cheat, and steal–hell, kill–to convince people you are a good guy.

He (Nick’s father) remained stubbornly distant even as he faded into dementia in his sixties. If you are always early, you are never late. My dad’s mantra, and that included the onset of Alzheimer’s–a slow decline into a sudden steep drop that forced us to move our independent, misogynistic father to a giant home that stank of chicken brother and piss, where he’d be surrounded by women helping him at all times. My good-hearted mom always told us that my dad had limitations, but he meant no harm. It was kind of her to say that, but he did do harm. I doubt my sister will ever marry; If she’s sad or upset or angry, she needs to be alone–she fears a man dismissing her womanly tears.

It bothers me that my marriage is disintegrating and I don’t know what to do… I worry, all the time. I know I am already too old for my husband’s taste. Because I used to be his ideal, six years ago, and so I’ve heard his ruthless comments about women nearing forty: how pathetic he finds them, overdressed, out at bars, oblivious to their lack of appeal…totally inundated by Lost Causes. At the time, a girl barely thirty, I’d smirked along with him as if that would never happen to me. Now I am his Lost Cause, and he’s trapped with me, and maybe that’s why he’s so angry.

I think one of my new year resolutions is to read books that are not sad or unrealistic or unrelated with me. I mean unrealistically good or unrealistically bad. It goes both ways. I gave up that resolution on the second week of the new year by reading “Gone Girl” by Gillian Flynn. It’s a thriller, it is unrealistic, it is a little sad, and it is completely unrelated with my life. It fits perfectly into my “not to read” list. Actually I’ve heard about this book since it was made into a movie, but I never felt the need to read it until now. Last month, I read two thrillers and felt that I like them quite well. This led to my ordering of two books by Flynn. The first one is “Sharp Objects”, which is quite interesting. “Gone Girl” is the second one.

And “Gone Girl” is a very interesting book. Amy and Nick are both working in publishing in New York. Of course Amy is incredibly beautiful and Nick is unbelievably handsome. Common people like you and me who are plain will never appear in books or movies. They get married. Then the financial crisis of 2008 happens. They are both laid off. Just when they are pondering what to do with themselves, Nick’s sister Margo (her nickname is Go) back in Missouri calls–Nick’s mother is diagnosed with stage 4 cancer. So Nick and Amy move back to Nick’s hometown. Amy is at first reluctant since she’s from the NY area, but she has no other choice…

They settle down in Missouri. Soon Nick’s mother dies and Nick’s father is checked into a retirement home with 24/7 care. Nick can’t find much to do. So he borrows money from Amy to open a bar with his sister Go. And several years after they move back to Missouri, on the day of their 6th year wedding anniversary, Nick comes home and finds his wife Amy missing.

He looks everywhere. Nothing. Eventually he calls the police, who shows up suspecting that Nick killed Amy and dumped her body. As the police is searching for clues, and Nick is searching for his wife, there are a lot of flashbacks to their married life that leading up to Amy’s disappearance.

And the flashbacks are very well written. Although the book doesn’t explicitly say that Nick’s father is a narcissist and Amy’s parents are narcissistic too, the content strongly implies that they are. Nick’s father is arrogant, distant, dismissive. He dislikes his family, dislikes women in general unless they become his maid. Amy’s parents have an affectionate exterior, but they are in fact quite cold and analytical towards Amy. They expect perfection from Amy and Amy never disappoints them. Actually Amy would lie, cheat, steal, frame others, manipulate to keep up her perfect girl image. Everything for her is a performance and she’s a perfect performer.

As Amy is still missing, evidence after evidence are piled up against Nick, who has a mistress 15 years younger than him; whose fingerprints are discovered on a golf club by the riverside with Amy’s blood on it; who has massed out on their credit cards to buy luxury goods for himself and stashed them in his father’s backyard shack; who lied to police about his whereabouts etc.

Then at the middle of the book, when I thought Nick is the killer for sure, suddenly there’s a reversal. Nothing is what it seems and the reality is quite surprising and very thrilling…

And many pages are really very well written and very quotable. I wish I can quote more, but somehow I feel that if I quote more, it will not be polite. It’s a book barely ten year old. Or probably it is not even allowed even though this post is supposed to be a reader’s book review.

Well, it is a very good read.

18 thoughts on “Quote Of The Day: The Perfect Performance”