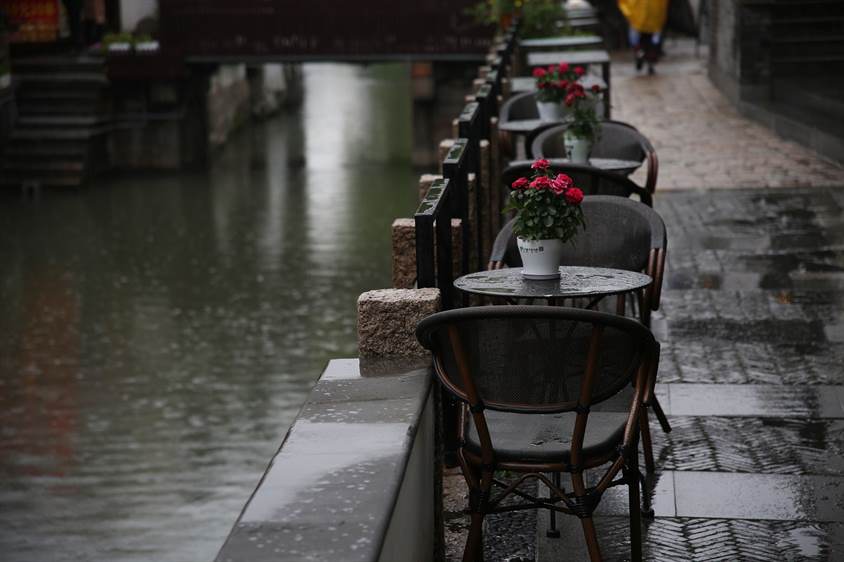 It rained all morning. We’ve had so much rain this year. I remember in the past there was always a period during the height of the summer that the grass would go brown for lack of rain. For some years, it’s three weeks and for other years it is one or even two months. However in the recent three to four years, the grass have always been green throughout the summer and the landscapers have to come in more often to mow the lawn.

hyetology: a branch of meteorology that deals with precipitation (as of rain and snow)

meteorology: the branch of science concerned with the processes and phenomena of the atmosphere, especially as a means of forecasting the weather.

precipitation: This word had puzzled me for a while until I just stopped thinking about the puzzle. It means two different things–The first one is the water that falls to the ground as rain, snow; and the second is the solid substance that drops to the bottom in a liquid such as water. For example, Edison Township gets 48.4 inches of rain each year on average.

pluvial: relating to or characterized by rainfall.

scattered shower: This word means that if there’s no shower occurring, one can’t complain the weather forecast is inaccurate. Usually the word is used when the percentage of raining drops below 50%.

pour: come or go in a steady stream and in large numbers. A heavy rain feels like somebody is pouring water from the sky.

thunderstorm: a storm with thunder and lightning and typically also heavy rain or hail.

thundershower: a shower of rain accompanied by thunder and lightning.

raindrop: a single drop of rain

monsoon: a seasonal prevailing wind in the region of South and Southeast Asia, blowing from the southwest between May and September and bringing rain (the wet monsoon ), or from the northeast between October and April (the dry monsoon ).

dribble: fall slowly in drops or a thin stream.

inclement: (of the weather) unpleasantly cold or wet. I’ve only seen this word being used in official announcements, such as “due to the inclement weather, the farmer’s market is closed today.”

hail: (of a large number of objects like frozen little ice pellets) fall from the sky.

overcast, cloudy: (of the sky or weather) marked by a covering of gray clouds; dull.

ice storm: a storm of freezing rain that leaves a coating of ice. I’ve experienced small ice storm once or twice a year. Know on the wood. Hopefully this winter will not bring any ice storm. It is said that ice storms form when a layer of warm air is between two layers of cold air. If it’s an encounter of one layer of hot air and one layer of cold air, it is forming normal snow, which is annoying but much better than ice storm. Once we had a big ice storm when I was living in Pennsylvania. I ventured out to buy something from the stores two blocks away, and ended up falling three times.

sleet: a form of precipitation consisting of ice pellets, often mixed with rain or snow.

runoff: the draining away of water (or substances carried in it) from the surface of an area of land, a building or structure, etc.

Phrases With Rain In Them Or About Rain

When it rains it pours: misfortunes or difficult situations tend to follow each other in rapid succession or to arrive all at the same time.

rainy day: a time of need or trouble

It rains cats and dogs: It used to describe particularly heavy rain

Every cloud has a silver lining: Every difficult or sad situation has a comforting or more hopeful aspect, even though this may not be immediately apparent.

rain or shine: It is used to say that something will happen even it rains

April showers bring May flowers: It is a reminder that even the most unpleasant of things, in this case the heavy rains of April, can bring about very enjoyable things indeed

take a rain check: politely decline an offer, with the implication that one may take it up at a later date.

rain maker: (informal•North American) a person who generates income for a business or organization by brokering deals or attracting clients or funds.

rain man: an autistic, or mentally and/or socially impaired person

It rains, and the wind is never weary;
My thoughts still cling to the mouldering Past,
But the hopes of youth fall thick in the blast,
And the days are dark and dreary.

It’s a wonderful story, but I really don’t think it is the author’s best story. He has so many wonderful short stories, like “The Letter”, about Southeast Asia that I can’t stop reading him. But I have to say he doesn’t depict the local people in a flattering light. Sometimes when I felt the author’s arrogance too much to bear, I had to throw the book away, but I often picked it up again later. One recurring thing in his book is that on many tropical islands of Southeast Asia, people didn’t have a recognizance of the value of money. Instead of teaching people to value money, the colonial governments built prisons. Whenever the local people took something from stores without paying, they were promptly imprisoned and drafted to go to the forests to build roads under barbarian conditions. Maugham mentions this many times in his writing, and he feels that it’s a form of injustice but he still thinks justice is served. Most people, including writers like Maugham, just heartlessly follow their indoctrinated values they grew up with no matter what. Among so many writers of the first half of the 20th century, only one George Orwell emerged.

“we ain’t got no money, honey, but we got rain” by Charles Bukowski

It is such a long poem and it is so good. However I can’t read him for long since it is so sad and so hopeless. Bukowski doesn’t care if his readers get depressed after reading his poem.